If you speak more than one language, you can probably think of at least a few words or expressions that just do not translate accurately to the other. That’s because words and expressions not only transport our personal ideas but also reflect cultural ideas from the culture that originated them. Those cultural ideas form a cultural context that shapes the meaning and nuances of a word or phrase, making the word much more difficult to express to someone from a different culture.

Untranslatable Words From Around the World

There are so many interesting sayings/words from other cultures that don’t have a precise translation in any other language. Sometimes these phrases can be so specific as only to apply in say, Caribbean Spanish, but not in any other Spanish speaking country. In fact, over 20 countries have Spanish as their official language, and all of them have made their own mark on the language. That’s why, even if you or one of your staff know Spanish, you may still need an interpreter to help accurately adapt these idiosyncrasies from Spanish to English and from English to Spanish again when trying to communicate with a Spanish-speaking customer or employee.

Of course Spanish is far from the only language with words that have no equivalent in English. 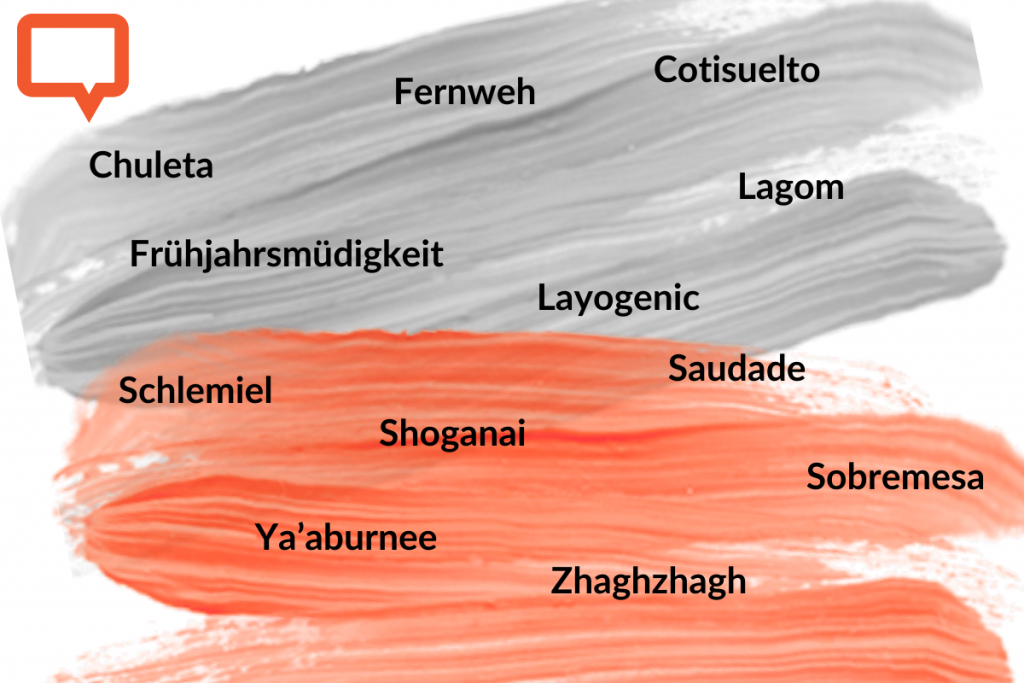 Here are some of our favorites:

Interpreters use the full spectrum of a language and a speaker’s cultural context to actively adapt a message. In cases where a word or expression can’t be translated literally without distorting or altering the meaning, a trained interpreter must quickly adapt the message using other words or phrases in the target language that will convey the meaning and connotation of the original speaker.

For example, think of expressions in English like “having a chip on your shoulder,” “a leopard can’t change his spots,” or “this is a piece of cake.”  How would these sound to someone of another culture if translated literally word-for-word? Not quite right. Regional words and expressions can also be misunderstood because they sound similar to a specific word in English, but have a different meaning. We featured an alarming example of this in a past blog that describes how a Spanish-speaking patient was misdiagnosed because of a language mistake. These examples demonstrate the importance of accuracy and cultural knowledge in interpretation.

Expert Interpreters at the Push of a Button

Remote Interpreting can provide an easy solution for a company needing to facilitate communication with a limited-English customer or employee, between members of multilingual teams, or with international clients and partners. Having a skilled linguistic and cultural interpreter can make the difference in accurately understanding a client or employee.

Because remote interpreting services do not require the interpreter to be there in person, companies can cut costs over using in-person interpreters. You can do this while keeping the ability to interpret untranslatable words and phrases and other contextual information such as gestures and eye contact. By using interpreters with cultural fluency specific to the target culture, the likelihood of a positive communication goes up substantially.

SpokenHere provides on-demand remote interpreting services charged by the minute, with no minimum call times or monthly fees. SpokenHere’s ConnectNow remote interpretation platform allows you to connect with culturally informed interpreters instantly from your desktop, tablet, or even mobile device.

When you find yourself in a situation that calls for a knowledgeable cultural liaison, we’re here to help. Contact us to learn more and view a demonstration.

By the time June rolls around, the warmer weather and sunshine are a welcome sign that summer has arrived. The first official day of summer happens each year on the…